Fifty Years of Geography at UBC

The timeline poster presents faculty, grad students and their publications in a chronological format, celebrating the many accomplished individuals who have contributed to making this department what it is today. 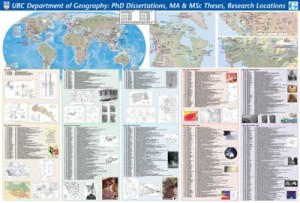 The documents are a wonderful tribute to the passion, drive, depth and breadth of research that form the foundation of UBC Geography.

Click on the images above to download a PDF version of the posters (6Mb & 9Mb, respectively). If you don’t have Adobe Reader installed on your computer, you can download a free version from Adobe.com.

History of Geography at UBC

The origins of the UBC Department of Geography go back to the establishment of the Department of Geology and Mineralogy in 1915. A half-year course in Physical Geography which was given in the fall of 1915, has become, in the form of the year-long Geography 101, the oldest continuing geography course in any Canadian university

In 1922-23 the name of the Department was changed to Geology and Geography, and UBC became the first Canadian university to have Geography as an academic division. The faculty consisted of three full-time members.

Construction of the “temporary” Geography Building circa 1925. ©UBC

In the Fall of 1946, J. Lewis Robinson was appointed to organize and expand the Geography program at UBC. Robinson was the first Ph.D. in Geography to be appointed at UBC. He was joined by John Chapman, from Oxford University, in 1947, and J. Ross Mackay, from McGill University, in 1949. In the 1947-48 session the department offered 12 Geography courses with a total enrollment of 750 students. A graduate program was started in 1947 and the first Honours students in Geography graduated in 1948.

In 1959, Robinson became the first Head of the newly defined Department of Geography. In the next decade undergraduate enrollments in Geography courses became the largest in any Canadian university, graduate students in residence increased from 14 in 1960 to 33 in 1965. A Ph.D. program in Geography was introduced in 1962. In 1972, a B.Sc. program in physical geography was introduced. In 1975, a M.Sc. program followed and in 1988, the Atmospheric Science program (sponsored cooperatively by Oceanography and Geography) was initiated.

The faculty increased steadily during the 1970s, to a total of 23; by the end of the decade there were 81 undergraduate and 28 graduate courses in Geography, 50 graduating B.A. Majors and 10 graduating B.Sc. Majors and Honours students, over 50 graduate students in residence, and a total student enrollment of over 2,000.

During the 1980s the number of student enrollees exceeded 3,000 and the number of permanent, full-time faculty increased to 25.5. The new faculty in part were appointed as a result of the Department’s success in being awarded two new programs from the Provincial Funds for Excellence in Education, in Atmospheric Science and the Geography of Japan.

Today the Department enrolls between 4000 and 4500 course enrollees and supervises about 80 graduate students. An external review of the Department in 2000 judged it the top all-round Geography Department in Canada, and comparable to the top 5 programs in the United States and Great Britain.