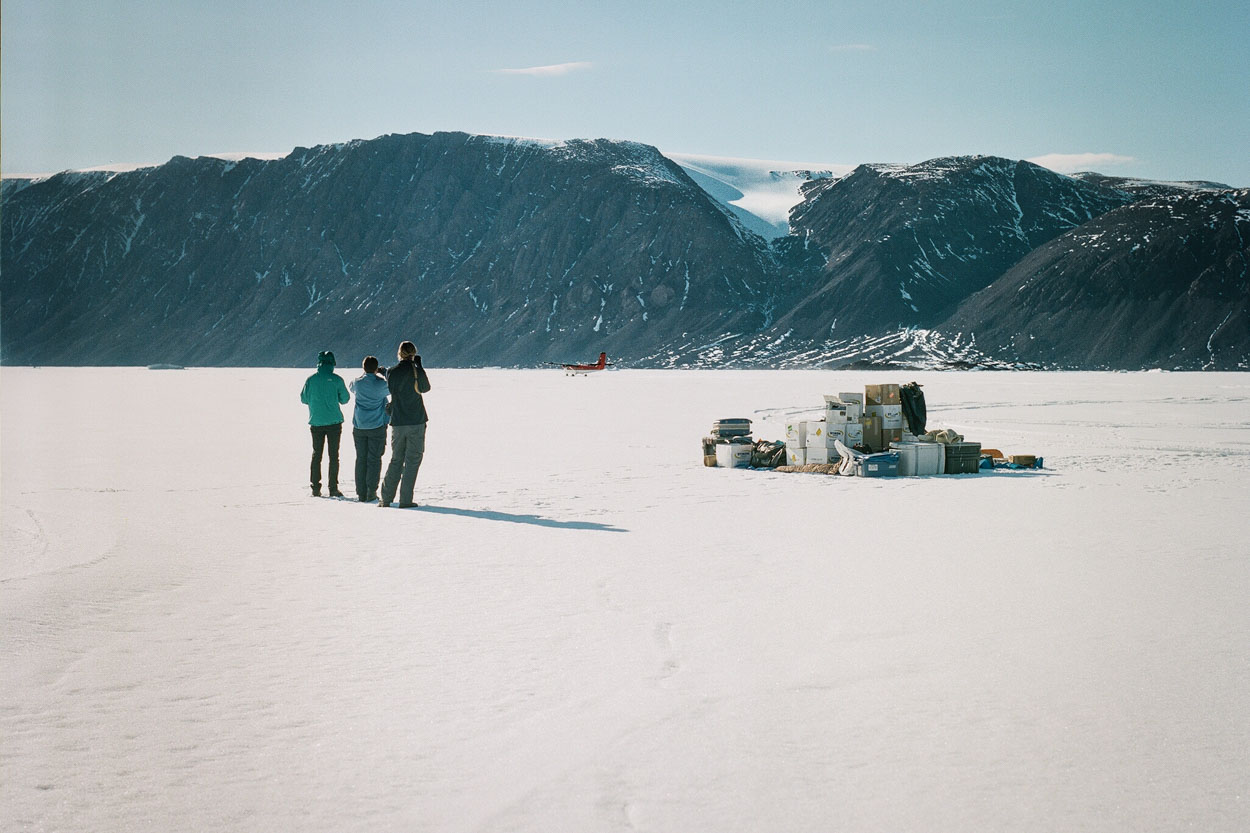 Danielle, Esther, and Cassandra watch the Twin Otter airplane take off, standing next to our pile of supplies and equipment for the summer.

Standing on the sea ice, Danielle, Esther, and Cassandra are taking pictures of the Twin Otter airplane that just dropped us here. The plane is already in the distance now, getting ready to take off from the flat frozen ocean. Beside the women is a pile of boxes – various scientific equipment, food, and personal belongings. Almost everything needed for the two and a half month field season at Alexandra Fiord. Here we will study tundra plants; amongst other projects, we are continuing to monitor warming experiments that were established in the valley 23 years ago. The airplane revs up. It picks up speed as it glides along on skis, and lifts off. For a few more minutes, we watch, then listen as the airplane disappears into the mountains. Then it is silence. Complete silence. No wind rustling leaves, no rivers raging in the distance, no generator, no cars, no air conditioners. It’s the beginning of June, and we’ve been dropped off on the eastern coast of Ellesmere Island, 315 km north of Grise Fiord, the most northern community in Canada.

And so begins our adventure. We hike our gear up a hill to two wood cabins that the team will call home for the summer. The cabins are part of an abandoned RCMP post built in 1953. The team consists of Professor Greg Henry, postdoc Esther Frei, Masters students Marilee Trudel (who will arrive in July) and myself, and undergraduate students Cassandra Elphinstone and Danielle Black. Relieved to find the cabins have not been broken into by a polar bear this winter, we quickly unpack and settle in. Only the windowless attic provides dark sleeping nooks away from the 24 hour sunlight, and most of the women settle for that. Greg sets up the solar panels to provide electricity, and attaches the gas to provide heating and cooking fuel. We pile a pot full of snow and set it to heat on the stove for water. Once the river ice breaks and water starts flowing, we will set up the shower.

Four days in, and we have a polar bear knocking on our door. It wakes Esther up at 4am. Adrenaline quickly wakes the rest of the women too, and we try to contact Greg via walkie talkie, who is sleeping in the other cabin. No luck. We decide to go outside and walk over to Greg’s cabin. We check all the windows before going out. No sign of the bear. We file out of the cabin, bear bangers in hand and ready to fire. After a few steps, Danielle turns around and calmly proclaims “Oh- there it is,” referring to the bear, perhaps 4 metres away. Arms up, shouting “Hey bear!” and “Get out of camp!” Danielle and Cassandra scare the bear to turn around and run off. Esther and I quickly follow with bear bangers. These wake Greg, who rushes out and shoots a few shots into the air. By now, the bear is running away, fast, back onto the sea ice. We name the bear Darwin, after it shows up two more days in a row, to very scientifically survey its’ curiosities. 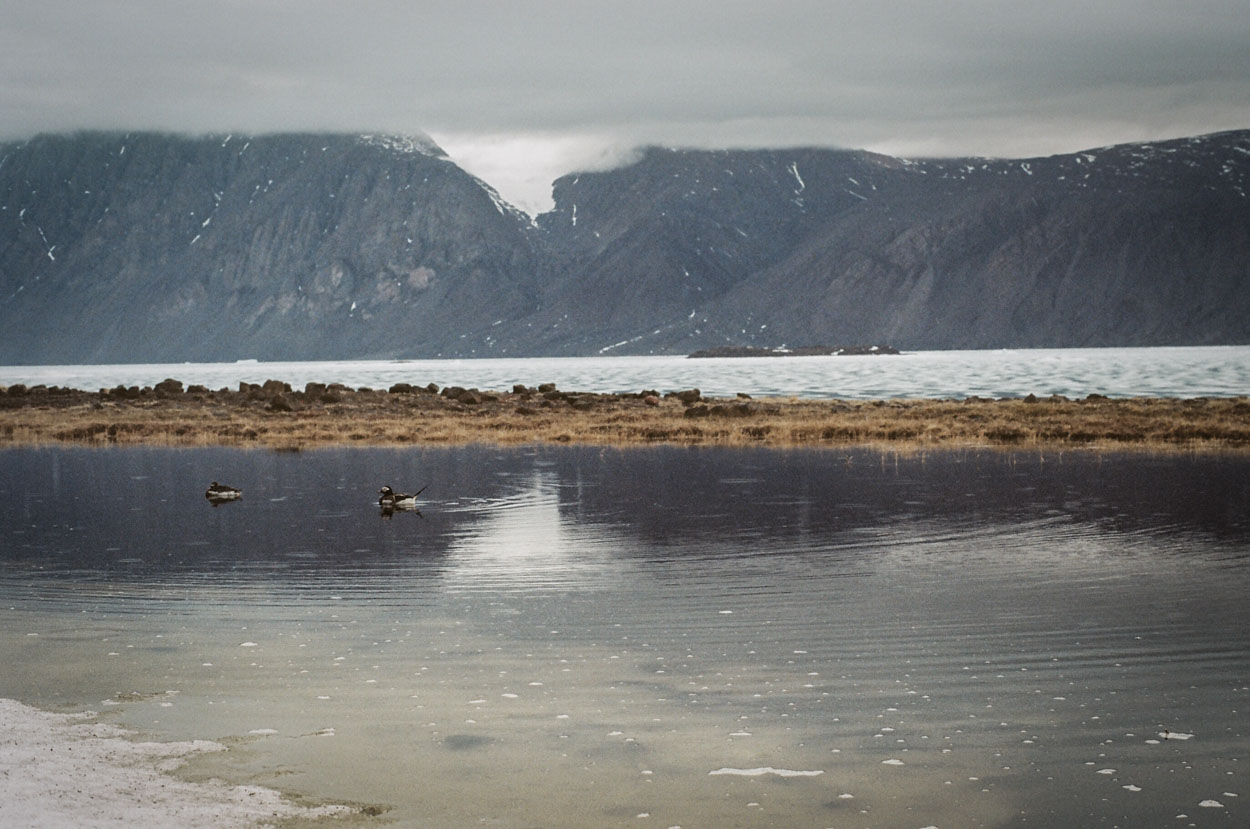 A pair of long-tailed ducks makes claim of a nearby pond, as they come to nest here during the summer.

After that initial excitement, the rest of our summer wildlife sightings are more peaceful. We get to know songbirds that nest near our cabins. We see foxes trotting across the tundra. Watch herds of muskoxen out of the windows of a helicopter. Learn how the seabirds Arctic terns hover before diving for prey. Count the eggs of a white gyrfalcon, and are enchanted by the song of the long-tailed duck. Through telescopes we watch polar bears hunting seals in their natural habitat, and see walrus diving for clams. Some nights you can sit outside and listen to a symphony of sea birds crying, icebergs melting, and walrus barking. 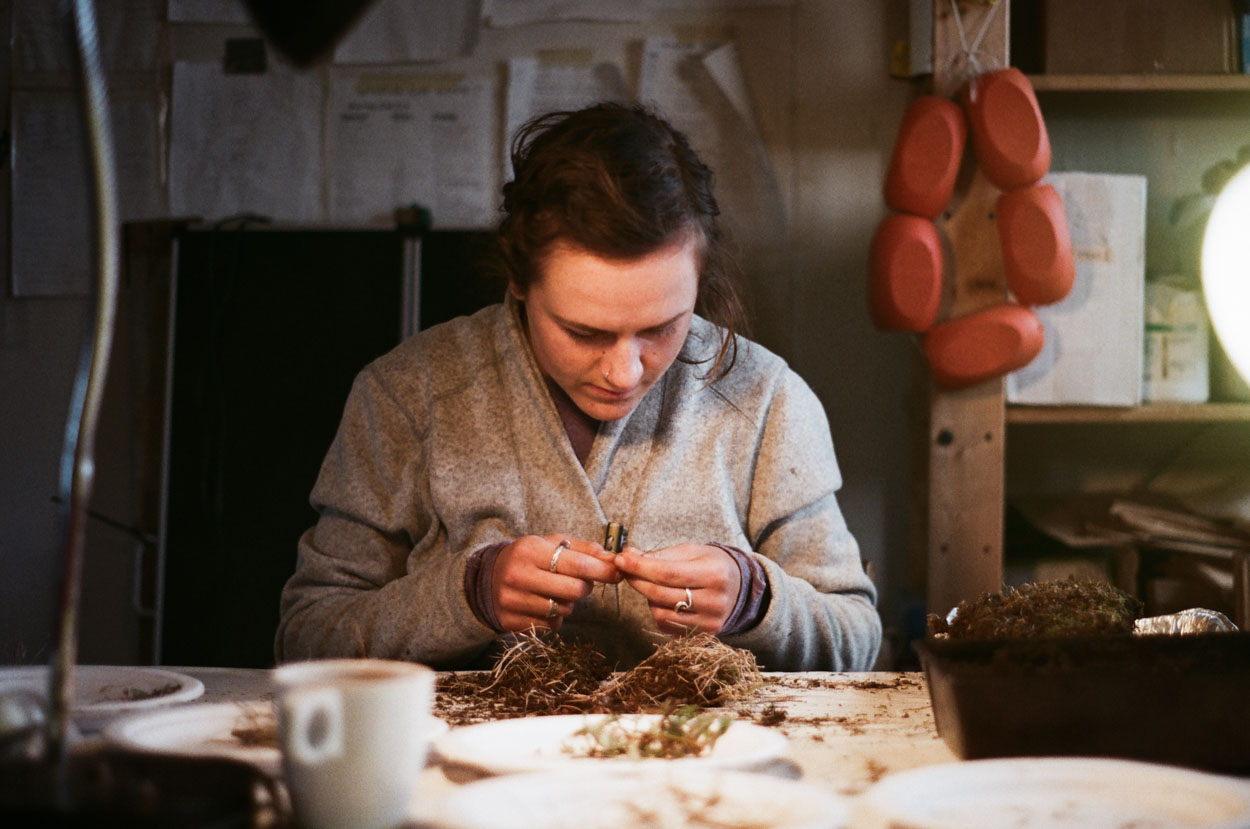 Danielle sorting sedges into species groups, to help determine the effect of competition in sedge meadows.

The summer passes by quickly with all the projects we have going on. Esther is monitoring the survival and development of transplant experiments, where seeds from several regions across the Arctic had been brought to Alexandra Fiord, grown into seedlings, and planted in common gardens throughout the valley by Greg’s PhD student Anne Bjorkman five years ago. We continue work on several of Greg’s long-term warming experiments that have been measuring plants and soils in and out of plots warmed by open-top greenhouses that he established in 1992. We cut and sort sedges for an experiment on inter-species competition that Greg brought to a close this summer after 25 years of treatment. We take photographs and GPS points for a GIS mapping of changes over time project that Cassandra will be working on for her honours thesis. And we start work on my master’s project, identifying and counting plants for a study on plant succession on a glacier foreland as the glacier recedes.

At the end of July, Greg leaves us and we are down to five. A group of kayakers paddles in and stays with us a few nights as a storm blows over. We share meals and play cards. We finally get up the courage to go for polar bear dips – before running up to the hot generator operated shower. One night we take out the old metal row boat, and row between the icebergs while drinking hot chocolate. By the end of the summer we even watch the sun set behind the mountains across the fjord, before seeing it rise again only an hour later. 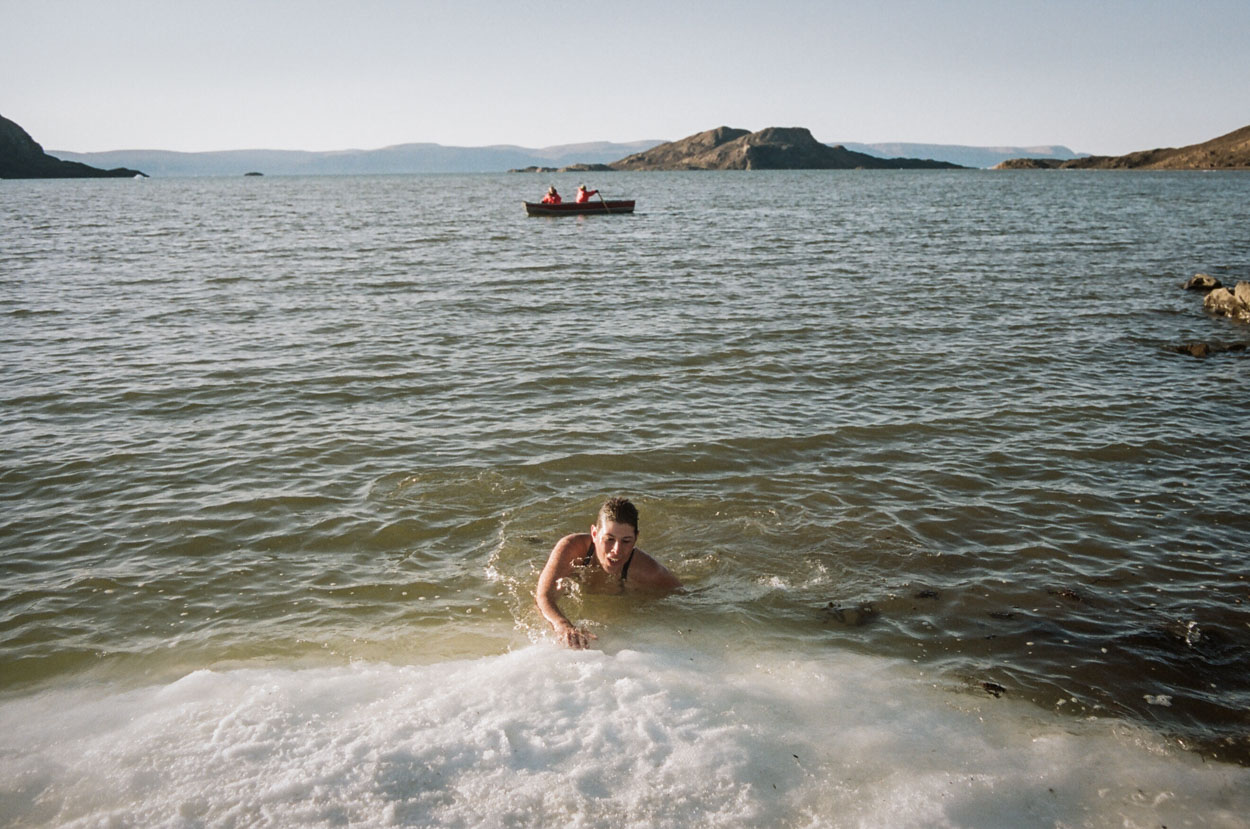 Marilie braves the Arctic Ocean for a polar bear dip, while Cassandra and Esther observe from their row boat.

Mid-August we hear the familiar hum of the Twin Otter again. This time it’s coming to pick us up. With the ice gone, we hike our bags up to the sandy landing strip. We buckle up for the bumpy take off. Now we watch the camp disappear into the distance, listening to the noisy hum of the airplane and awaiting unfamiliar civilization. I am hit with emotion. I feel a kind of barrier between our life at Alexandra Fiord and in cities. Like the kind of barrier that exists between being conscious and unconscious. Two worlds that cannot coexist. We stay a few nights at the scientific base in Resolute, before boarding a commercial airline back to Ottawa. The bare land and iceberg filled oceans are soon exchanged for trees and blue lakes. I am waking up.