If you talk about “the signage issue” in Richmond BC, most residents of Metro Vancouver would probably know what you were talking about. It refers to the ringing complaint that Chinese languages dominate Richmond’s linguistic landscape. In the past few years the City of Richmond has refused to heed these complaints. However, in the lead up to the November 2014 City election Council announced that they would formulate a response to the demand that the City begin regulating the language on commercial signage. The response included comprehensive public consultation and research. Dan Hiebert and I were asked by the City of Richmond to look into “the signage issue” to try to help them understand the challenge with which they were faced.

The “signage issue” can be described most simply as the concern by some that there had been a proliferation of non-English language signage in the City of Richmond. For some this has been articulated as a threat to multiculturalism, to others it is a concern over public safety (i.e. “how could I describe my location to an ambulance in case of emergency if I can’t read the signs?!”) and for others it is said to produce a sense of social exclusion and alienation (i.e. “I am not welcome in stores where I can’t understand the sign”). This issue has been “hot” for at least the past three years, marked by two particular moments: March 2013, with the submission of a 1,000 signature petition to Council to introduce language regulation in the Sign Bylaw (requiring two-thirds English language on all signage), and in October 2014 as a controversial election issue. Between the angered letters to Council and the frequent news coverage, a common narrative emerged connecting a vision of “rapidly” changing demographics and the ethnic makeup of the City of Richmond, with a concern over a lack of immigrant integration.

The City of Richmond’s response was multi-pronged. We undertook the research component, SFU Centre for Dialogue hosted a community workshop, City staff commenced a signage audit, and legal advice was sought.

The legal advice received by Council suggested that language regulation would be a breach of the Canadian Charter of Rights and Freedoms, unless a threat to public safety could be demonstrated. The signage audit conducted by City staff revealed that less than 3% of commercial signage included no English or French language. And while the public workshop was a success, with productive and open debate, complaints and demands for an updated Sign Bylaw persisted.

Our enquiry was framed by a curiosity as to how much of an issue the “signage issue” really was. What were the other underlying concerns shaping the complaint letters and angered local media? And how did this issue speak to broader tensions around immigration, identity, prejudice, and belonging? 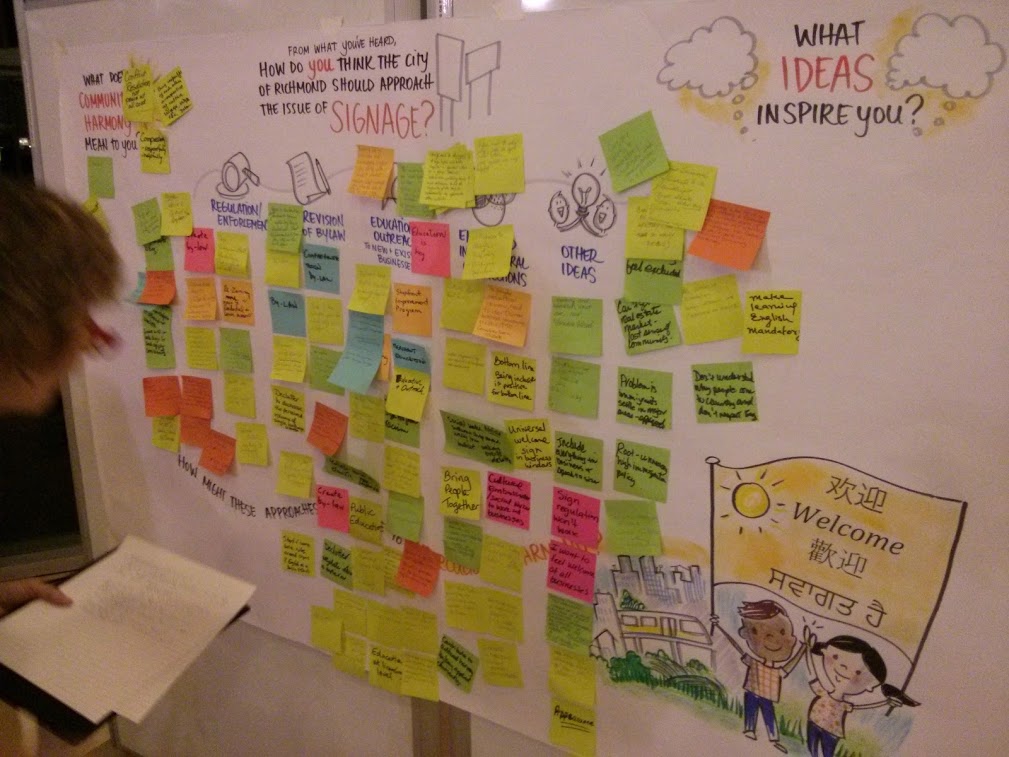 Our findings produced a complex story that could by no means be solved by an urban planning intervention with an English/French language quota. As was demonstrated by the City’s sign audit, there were some major gaps between perceptions of the linguistic landscape and its reality. When all the objection letters were accounted for it became evident that at least one third of all the complaints received had been from a single individual (who, incidentally, was not a Richmond resident). And though the issue was getting a lot of media attention, upon closer inspection we could see that it had been largely inflated by a small number of individuals.

Complaint letters and media coverage frequently and inaccurately presented Richmond as a polarized and competing landscape, of exclusively British and Chinese populations. This representation obscured the heritage and displacement of indigenous populations, as well as the present super-diversity of Richmond (where residents speak 79 different languages and report 161 different ethnic origins). Many complaints were framed by, what we called an “invasion narrative”: anxieties over a diminishing British-heritage Canadian population and what were seen to be Canadian identity and values. For some objectors, the issue was considered as the proverbial “canary in the coal mine” resulting in national news media coverage and complaint letters from beyond Richmond’s borders (some from as far as Ontario).

Following the comprehensive City response to complaints over non-English signage, a decision was made to reject calls for language regulation in the Sign Bylaw. Mayor Brodie announced in May that “to bring in a draconian bylaw which mandates a certain amount of English will be sending out the wrong message and be counter-productive in terms of community harmony.” Director of Administration and Compliance, Cecilia Achiam’s voice was also heard, recognizing that “the issue of use of language on signage is indicative of a much deeper concern in the community around community harmony, social cohesion and Canadian values.”

A hopeful view of this outcome might echo Leonie Sandercock’s (2003) vision of possibility in super-diverse cities like Richmond BC. Now that the City of Richmond has formally rejected the call to regulate the language on commercial signage, and publicly acknowledged the presence of underlying tensions, there is a new potential space in which Sandercock’s question might be more directly addressed: “how can ‘we’ (all of us), in all of our difference, be ‘at home’ in the multicultural and multiethnic cities of the 21st century”?