Home / Glacier retreat can lead to an increase in landslides

Glacier retreat can lead to an increase in landslides 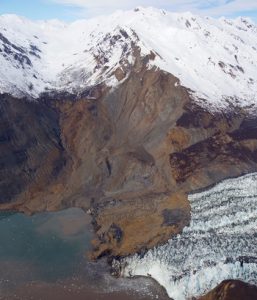 The 2015 landslide, with debris partially covering the terminus of the glacier

A new paper from UBC Geography graduate Hayley Williams and associate professor Michele Koppes has highlighted the connection between landscape instability and the retreat of glaciers due to a warming climate.

In a study of the Tyndall Glacier in Alaska, Williams and Koppes found that the glacier’s retreat was “one of the key triggering mechanisms” for a large landslide in October 2015.

The resulting tsunami “stripped the vegetation and some of the alluvial deposits from almost all of the low-lying fans in the fjord, as well as along the fjord walls to within several tens of meters of sea level.”

The Tyndall Glacier has retreated 17km since 1961, and its concurrent thinning exposed the unstable slopes.

This is just one case in which the ice volume of a glacier provides support for surrounding rock, and its accelerated retreat due to anthropogenic climate change can weaken and consequently destabilize steep slopes.

You can read the paper and its findings in full on the open access journal Annals of Glaciology.