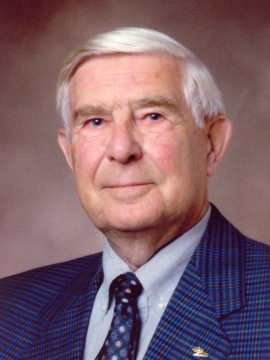 It is with great sadness that we report the passing of our distinguished colleague John Chapman. Born in Poole, Dorset on July 24th, 1923 he died in Vancouver on June 9th 2015. John retired from UBC in 1988 having been a member of the department for about 40 years – probably a record.

John joined the RAF in 1942 via the University Entrance Plan. After training he became a flight instructor, including a secondment to Canada. Later he was posted to the Tactical Air Force and Ferry Command where he flew aircraft to far-flung destinations around the world at the end of WWII.

John completed his initial degree (MA) in Geography at Brasenose College, Oxford in 1947. He was interviewed by UBC President Larry McKenzie and immediately appointed a junior instructor in Climatology. He and his wife Pat moved to UBC and were initially assigned to faculty housing in a wooden hut on campus. Similar huts housed portions of the department at the same time. John completed his Ph.D. at the University of Washington.

After writing a definitive account of the Climate of BC, John’s focus shifted to economic geography and energy policy [Geography and Energy, 1989, John Wiley], interests that he maintained throughout his life. John was the second Head of the Geography Department (1968-1974). During his tenure he is credited with making several key appointments that proved instrumental in the department’s emergence as a globally recognized research and teaching unit. John spearheaded the BC Atlas of Resources, a large and colourful book for its time. He was a strong supporter of the Geography Colloquium, attending as recently as this April. Literally up until a day or so before his passing he paid close attention to developments in the discipline, department, university and province.

John was dedicated to a high quality education system. Early in his UBC career he was seconded to the university administration and became the university academic planner. Soon he was chosen to join a select team commissioned by the Province to design a plan for expansion of university and college education in BC. In 1962 the team produced the highly influential Macdonald Report. That set the scene for the founding of the modern post-secondary system of education in BC, including the establishment of UVic, SFU, two-year university colleges and the system of transfer credit.

These interests continued after his retirement. He was appointed to the Board of Vancouver Community College, chair of the education committee of the BC Association of Colleges, director of legislative committees for the BC Ministry of Education Advisory Committee and the BC Ministry of Advanced Education and chair of the Academic Council for BC Open Learning. From 1990-93 John was instrumental in the formation of the University of Northern British Columbia who later bestowed an honorary LL.D degree. He was President of the Canadian Association of Geographers, Chair of the Pacific Science Congress and founding Chair of the Pacific Marine Institute.

These are some of the many accomplishments of John Chapman’s academic life but he was also a very significant figure in the Canadian field hockey community as a player and again as a tireless builder of the sport. He was President of the Canadian Field Hockey Association (1972-74) and played a major role when Canada hosted the Junior World Cup.

John was a great gentleman, geographer and institution builder. We all feel privileged to have known him as a friend and dedicated colleague.

A Celebration of John’s Life will take place at 1PM on Monday June 22nd at Cecil Green Park House.