Home / Open letter from students, faculty and staff regarding the Wet’suwet’en

Open letter from students, faculty and staff regarding the Wet’suwet’en 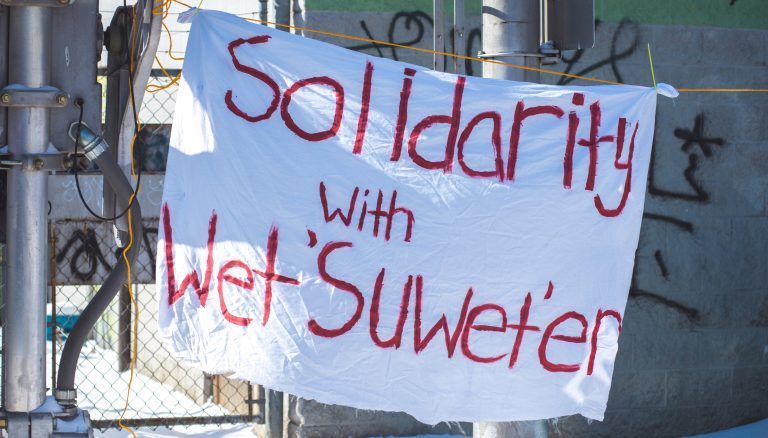 UBC Geography respects that its students, faculty members, and staff members hold a broad range of personal views on a variety of topics. The following open letter, regarding the dispute between Wet’suwet’en hereditary chiefs and Coastal Gas Link, has been signed by a significant number of students, faculty members, and staff members in the Department of Geography. It is not an institutional statement and, as stated in the letter itself, is intended to represent the personal views of the undersigned only. It is being released after considerable reflection and discussion.

Second, we are deeply concerned by the escalation of force, militarized police action, and recent arrests by armed RCMP officers. We were shocked and distressed to learn, as indicated by the BC Human Rights Commissioner, that the RCMP was prepared to use lethal force in its enforcement action on Wet’suwet’en territory. As the Human Rights Commissioner has cautioned, it is a matter of fundamental human rights that peaceful protestors should not be met with state violence. The British Columbia Human Rights Commissioner further stated: “Indigenous peoples who oppose development projects on their traditional territories should never be met with violence for peaceful opposition. I [urge] Canada to immediately cease the forced eviction of Wet’suwet’en peoples, to prohibit the use of lethal weapons, and to guarantee no force will be used against them. This is a matter of fundamental human rights.” We welcomed the statement reported in the Ubyssey on Jan 24th, in which Kurt Heinrich, Senior Director of UBC Media Relations, stated that “UBC does not condone violence of any kind and we urge people to strive for a calm and orderly resolution to the conflict – one that aligns with the peaceful and mutually respectful guidelines of behaviour articulated in the UN Declaration on the Rights of Indigenous Peoples.”

Third, we note with deep concern the contravention by Crown governments of our legal obligations to implement the UN Declaration on the Rights of Indigenous Peoples (UNDRIP). UNDRIP includes provisions recognizing the right to self-determination, and the need to obtain the Free, Prior and Informed Consent of the Indigenous Nations when development is proposed in their territories. British Columbia has passed legislation bringing the UNDRIP into law. We note that the UN Committee for the Elimination of Racial Discrimination recently released a statement in which it called upon the Canadian government to ”immediately halt the construction and suspend all permits and approvals for the construction of the Coastal Gas Link pipeline in the traditional and unceded lands and territories of the Wet’suwet’en peoples, until they grant their free, prior and informed consent, following the full and adequate discharge of the duty to consult.” The statement also called upon Canada to: immediately cease forced eviction of Wet’suwet’en peoples; guarantee that no force will be used against Wet’suwet’en peoples; and prohibit the use of lethal weapons against Indigenous peoples. We affirm the need for Canada to respect its international legal obligations endorsed by Canada and British Columbia.

Fourth, we urge all parties involved to focus on the primacy of upholding human rights, including the principle of Free, Prior and Informed Consent. On January 10th, 2020, the BC Human Rights Commissioner issued a statement which noted that “as a signatory to the Convention to End Racial Discrimination (CERD), Canada has obligations to the CERD. Moreover, B.C. and Canada have —or plan to — legislate the UN Declaration on the Rights of Indigenous Peoples. As such, we have obligations to ensure free, prior, and informed consent exists for all impacted Indigenous groups before projects impact lands.”

We also wish to respectfully acknowledge that some First Nations governments support the Coastal Gaslink project. Our letter is not intended to undermine their views or authority. Rather, we echo the BC Human Rights Commissioner in stating that: “Human rights are not a numbers game. Human rights do not exist only for the majority. They exist for each individual, and in the case of free, prior, and informed consent for each Indigenous rights holding group…this is precisely when our commitment to human rights principles is truly needed.”

We feel compelled to make this statement given the University of British Columbia’s stated commitment to implement the Truth and Reconciliation Commission’s calls to action. We respectfully call on other members of the UBC community to issue public statements on this matter.

Members of the UBC Geography community can continue to add their signatures in support.