Home / Written out of history: restorying the archive

Written out of history: restorying the archive 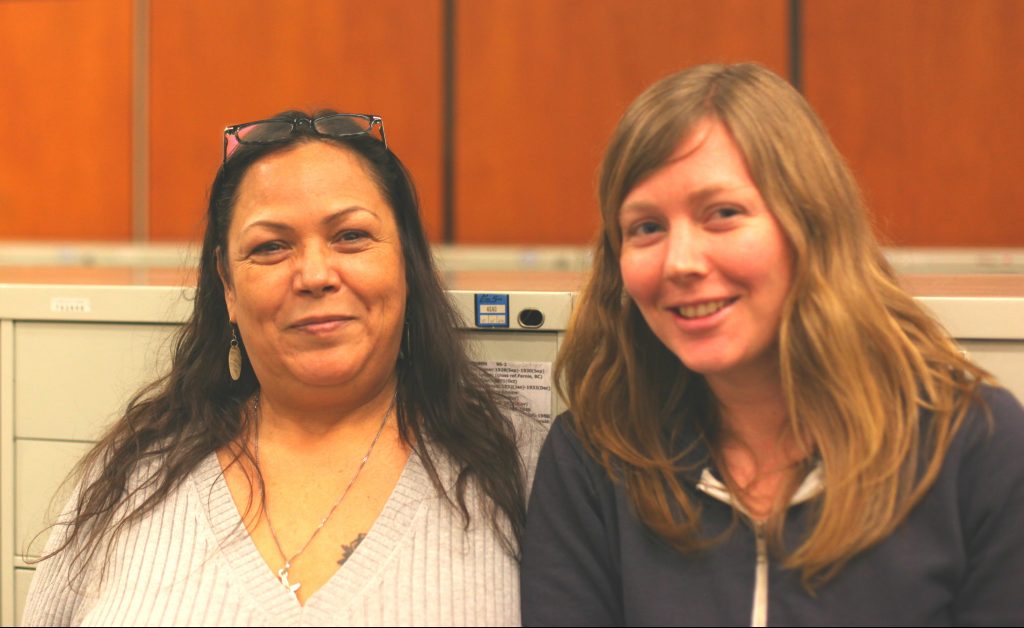 As a filmmaker, Jessica Hallenbeck knew that she wanted to do more than just write her PhD at UBC Geography. But film turned out to be an essential collaborative tool for the storytelling she and her creative partner needed to do; addressing the erasure of Indigenous people and their histories in the archive.

The basis of Hallenbeck’s thesis is a long term collaboration with Sahtu Dene and Coast Salish storyteller Rosemary Georgeson. Having previously worked together on the short film Women in Fish: We Have Stories, which explores the experiences of Georgeson and women of her community who worked and grew up in the commercial fishing industry, the two were keen to continue collaborating. Georgeson wanted to explore more of her family history, and invited Hallenbeck to include the work they would do together on this in her PhD.

However this raised many questions for Hallenbeck. How do you pursue an equal collaboration when a PhD is ostensibly a single author project? Can you do meaningful decolonizing work within the structures of academia? 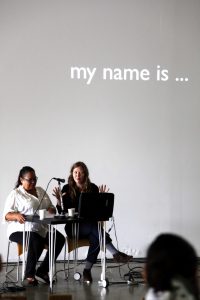 “I was really conscious of how challenging it actually is to do collaboration in a responsible, ethical, decolonial way as a white settler researcher,” she explains. “So I was pretty reluctant to bring a relationship and friendship into the academy.”

Ultimately,  it was film that offered the solution. A more natural fit for the way in which she and Georgeson wanted to work, it was a form they could both have authorship in.

“I approached Rose and asked her what she would want to do. She told me that there were two Indigenous women in her family; her great grandmother (at the time we only knew her name was Emma) and her great great grandmother Sophie. She wanted to learn their traditional names, what territories they were from, and find their descendants because her family had been separated from them. So based on that I built a dissertation project that would allow us to do that work, but also create a space where I wouldn’t write about those stories.”

For Georgeson, who had been hearing these disconnected stories about her great grandmother for years, it was time for her family to piece them together: “It was our story to tell, no one else’s but ours.”

Hallenbeck travelled with her to meet with family members and Elders who could help recover their history – filming their conversations in a piece that Georgeson directed. 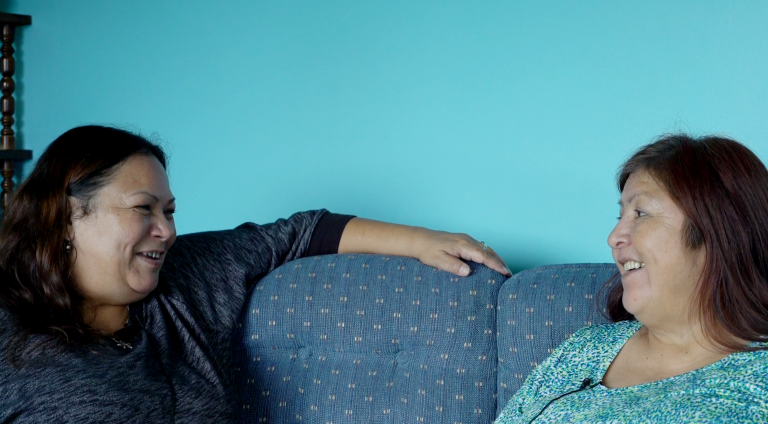 As an Indigenous filmmaker and storyteller, Georgeson’s interest lay both in gathering together these personal memories, and in uncovering how the colonial nature of the historical archive had worked to erase and obscure the histories of women in her family.

Support from the Public Scholars Initiative at UBC paid Georgeson to do her research alongside Hallenbeck, and to direct the film of personal testimonies which forms a chapter of Hallenbeck’s PhD.

Hallenbeck describes the film, which is called In Defiance Of All That, as a challenge to how knowledge is generally produced, circulated and valued within the academy. “The interviews in that chapter are not transcribed and brought into the written part of the dissertation; they stand on their own as valid knowledge.”

Producing this was a different way of working for both women, Georgeson says. “The scenario that I was trying to create was a different way for Jess to film, but she understood it when we started looking at the footage and how people were comfortable and completely forgot that there was even a camera on us… We have both learned from each other and if there is something that comes up we talk about the best way to approach it. Everything we do together comes with a lot of talking about process, outcome and history surrounding the project.” 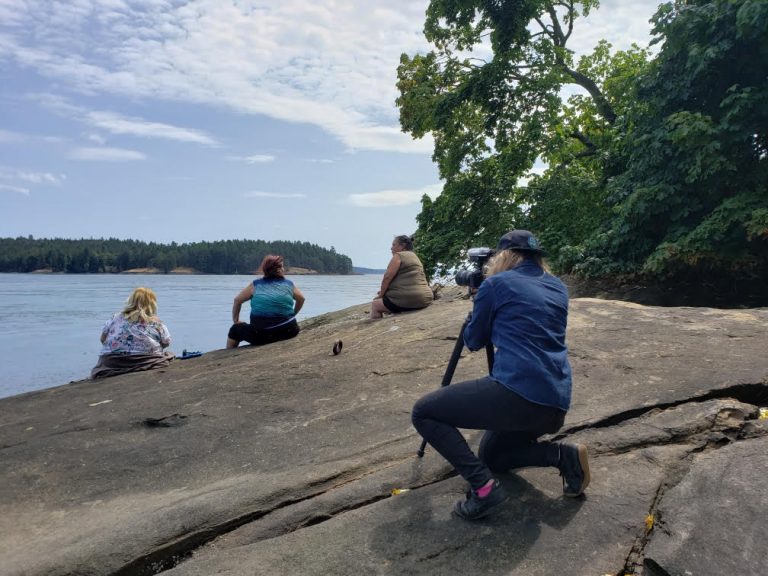 For her part, Hallenbeck felt her role in this aspect of the process was to be as unobtrusive as she could. “Rose directed it, so she was very clear about when to turn on the camera, she was very clear in her mind about where the questions or the discussions where going to lead, what parts of the territories she wanted me to film.”

Both film and archive are fundamental to the story that emerges from their collective work. “On the one hand it’s about the colonial archive and how Indigenous women are eliminated from it, but on the other it really is about connections that women have held together over 5 generations and how that continues despite these forces,” says Hallenbeck.

It was also a very personal journey for Georgeson. “I was raised mostly by my grandparents. I always knew we had a big history and that we had connections all over the coast….We heard bits and pieces of stories growing up. Names were spoken of, but not the same names that my grandfather’s siblings carried after Indian agents, the church and the government changed the spelling and wrote down what they thought they heard. We always believed my grandfather’s brother’s name was Herbert; somehow his name became Albert. The spelling of our last name got changed to Jorgenson. These were some of the reasons I could not find anything about our family.” 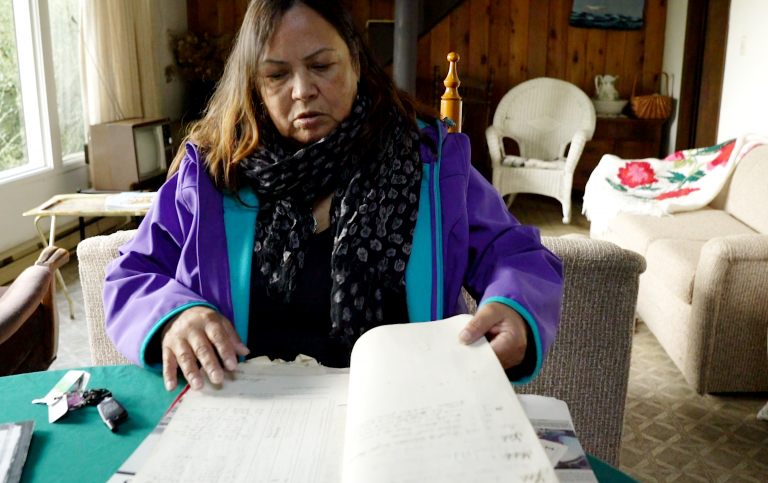 “When my grandmother was dying of cancer, I spent 3 or 4 nights a week with her. She would lay on the couch holding my new baby and tell me stories about everything she could remember. She told me about all the good and the bad things that happened in our bay. We did this for about a year. She wanted me to know everything there was to know to piece our family back together. My grandmother, my white grandmother, is the reason this story has been brought out of the shadows of colonialism and is being shared so beautifully today. We all would have been just another side effect of colonization, history, Indian agents, racism. My generation is the last one that would have been able to tell this story and no one knew who all the characters were…. It really made me understand how much our grandmothers were written out of history.”

Hallenbeck’s final thesis will itself become part of the archive, and both women hope to share this story with a wider community in the future. First in Georgeson’s home of Galiano Island and later through a public talk, film and co-authored book.

Hallenbeck sees the process as just one of many alternative methods of knowledge creation that Geography students can utilize. “[Film is] a way to co-create knowledge, to present and centre knowledge that is shared through a research process. I always think of it as Rose and her family building theory, and it’s a way to center that. So it’s a decolonial approach to knowledge production, and I think that’s really important with geography especially. Geographers – we’re storytellers, we really are.”

All images courtesy of Rosemary Georgeson and Jessica Hallenbeck